The Lusitania and the Wanderer

On Saturday I went to the Manx Museum to listen to a talk on the three ‘ships’ that were relevant to the first few minutes of the Lusitania’s sinking.

We all know about the sinking of the luxurious liner Lusitania in just eighteen minutes off the Old Head of Kinsale in Ireland in 1915 by a German submarine which resulted in the loss of 1,198 lives, and how tragic it was that it was sunk by a German U Boat.  But how many of us are aware that  one of the first rescue vessels on the scene was a small Manx fishing boat PL11 Wanderer, from Peel on the west coast of the Isle of Man, which rescued 160 passengers and brought them to safety.

It was to be two hours before rescuers heading from the Irish mainland reached the scene, but the crew of the twenty ton lugger, Wanderer, fishing a few miles off Kinsale, with 800 mackerel on board, was alerted by Thomas Woods, after he saw the Lusitania listing. Steering the vessel, Woods was alone on deck, on watch, having sent little Johnny Macdonald below to make tea. The skipper of the Wanderer, Stanley Ball from Jurby, is reported to have said to Woods ‘Go for her, be British’.

Undeterred by the danger of enemy submarines, these brave Manxmen headed for the scene of the incident, and were soon within a quarter of a mile of the Lusitania; witnessing the horrifying spectacle of hundreds of people, many badly burned, fighting for their lives in the sea.

The crew of the Wanderer hauled on board 160 men, women and children, including a two month old baby, but others were clinging on to the sides of the vessel pleading for help; its heavy load pulling the boat low into the water.

As they sailed towards the Old Head of Kinsale, with fine weather and a calm sea, towing two lifeboats besides, the skipper and crew of the Wanderer offered comfort to the survivors with clothes, blankets, food and drink.

Two miles from land the Wanderer was intercepted by an Admiralty tug, the Flying Fish, into which were transferred the devastated survivors, many of whom required urgent medical attention, before sailing for Queenstown (now Cobh).

The Flying Fish docked to a hero’s welcome, but few realised the valiant role of the Wanderer, which returned to the site of the disaster, but found no further survivors.

It was difficult for some of the crew members of the Wanderer to come to terms with this war-time atrocity, reinforced by extracts from surviving letters, but their valiant act was recognised by members of the Manchester Manx Society who arranged for Mr F. S. Graves to design a special medal, which was presented to each of the crew by the Lieutenant Governor, Lord Raglan, on Tynwald Day 1915.

The names of the crew were:- William Ball (skipper) of Jurby, and his son, Stanley, William Gell of Ramsey, Thomas Woods, Robert Watterson, John Macdonald, and Harry Costain, (all of Peel). The vessel was owned by Mr Charles Morrison also of Peel. 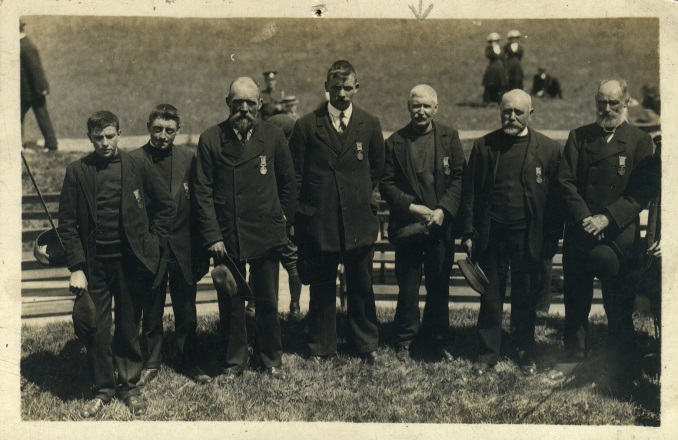 Below are extracts from the crew of the Wanderer

The Skipper’s Letter to Mr Morrison:

….We had rather an exciting experience on Friday afternoon, about 2-30 p.m. We were coming in with about 800 mackerel, the wind light and ahead, and we put off to sea again for another shot, rather than lose the night. When we were six or seven miles off the Old Head we saw the Lusitania sink, after being torpedoed by a submarine, about three miles SSW. outside of us. We made straight for the scene of the disaster. We picked up the first boats a quarter of a mile inside of where she sunk, and there we got four boat loads put aboard us, We couldn’t take any more, as we had 160– men, women, and children. In addition, we had two boats in tow, full of passengers, We were the only boat there for two hours Then the patrol boats came out from Queenstown. We had a busy time making tea for them – and all our milk and tea is gone and a lot of clothes as well, and the bottle of whisky we had leaving home. The people were in a sorry plight, most of them having been in the water. We took them to within two miles of the Old Head, when it fell calm, and there was a little air ahead. The tug boat Flying Fish from Queenstown then came up and took them from us. . . . It was an awful sight to see her sinking, and to see the plight of these people. I cannot describe it to you in writing….

….The saddest sight I ever saw in all my life. I cannot tell you in words, but it was a great joy to me to help the poor mothers and babes in the best way we could….

….We saw an awful sight on Friday. We saw the sinking of the Lusitania, and we were the only boat about at the time. We saved 160 people. and took them on our boat. I never want to see the like again. There were four babies about three months old, and some of the people were almost naked – just as if they had come out of bed. Several had legs and arms broken, and we had one dead man, but we saw hundreds in the water. I gave one of my changes of clothes to a naked man, and Johnny Macdonald gave three shirts and all his drawers….

….We saw the Lusitania going east. We knew it was one of the big liners by her four funnels, so we put the watch on. We were lying in bed when the man on watch shouted that the four-funnelled boat was sinking. I got up out of bed and on deck, and I saw her go down. She went down bow first. We were going off south, and we kept her away to the S.S,W. So we went out to where it took place – to within a quarter of a mile of where she went down, and we picked up four yawls We took 110 people out of the first two yawls, and about fifty or sixty out of the next two; and we took two yawls in tow. We were at her a good while before any other boat. The first person we took on board was a child of two months. We had four or five children on board and a lot of women. I gave a pair of trousers, a waistcoat, and an oil-coat to some of them. Some of us gave a lot in that way. One of the women had her arm broke, and one had her leg broke, and many of them were very exhausted….